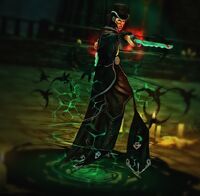 Adrian The Fallen is Victor Vran's old friend and also the boss of the Weeping Halls dungeon, located in the Royal Crypt.

Adrian summons Vampiric Totems, that creates beams of red light that inflicts damage and cure Adrian, more rays inflict more damage (similarly to the tactic of the Vampire Acolyte and the Essence of Lightning).
Is better to avoid his melee attacks, as they inflict serious of damage. Since Adrian can make a bombardment-like area attack, is necessary to keep an eye to the battlefield, give that the explosion of a blast is preceded by a luminous circle.
Equipping The Runner Destiny Card is a good help.

Before being turned into a vampire, Adrian was Victor's best friend, the only one to whom Victor told his past. Adrian went to Zagoravia, as many other hunters, to stop the demonic invasion and, perhaps, investigate its cause. Victor didn't have any news of him and believed him dead until he, unexpectedly, received a message from his old friend. Willing to know what was of his friend and to find out why he invited him to Zagoravia, Victor embarked on a dangerous journey to the cursed city that no caravaner wanted to travel to. Once there, Victor had to search for Adrian, as he din't send him any new message or other sign of him. While exploring the city and realizing that something had drawn many hunters in the crypts of Castle Zagore, Victor starts to wonder what is happening and why no one escaped or left the city. He really has a grim surprise when, once he sets foot in the Weeping Halls, inside the Royal Crypt, he finds Adrian turned to a vampire, trying to convince Victor to become a vampire too and take the great power that lies in the city for themselves.

"The time of the hunters is over, Victor.
This city will be their grave.
I can make you stronger than you can imagine, Victor.
A single bite, Victor. That's all it takes.
You are blind, Victor! Like I was before I received this gift.
Give in and I will make you see, old friend.
'This city holds great power, Victor.
Join me and we can take it for ourselves."

Victor has to kill the abomination his old friend has become.