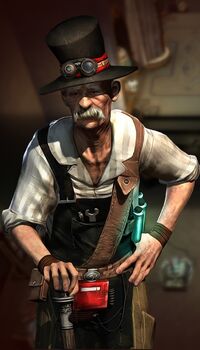 Damian is a merchant in Castle Zagore.
He sells miscellaneous weapons, potions and bombs.
When first meeting him, he presents himself as Damian the Alchimist.

"I'm Damian the Alchemist. I can help you with useful supplies, like potions and bombs, and you can help me with your gold, he-he-he.
We Alchemists are said to transmute gold into air, but it is all for the benefits of science! Take a look through my inventory, there's not much demand from hunters these days"

Damian sees Queen Katarina's stand for Zagoravia as a lost cause and believes it would be better for them to flee, as they're most probably the only survivors in all Zagoravia, awaiting death trapped as mice in Castle Zagore. The old merchant has an often dark sense of humor and jokes several times about the horrible death that awaits them all.

"That fire-headed girl, Irene, she is a good hunter - brave, but not reckless. She brought back some interesting items from her forays.
It's too bad she will die so young and pretty. Demons will have her, no doubt. Care to browse my inventory?"

He's also quite shocked by Victor's decision to remain in Zagoravia to continue the fight against the demons, and he's not subtle about his bad feelings on it.

"A crazy decision, Victor - to stay and fight. Try not to lose your mind like our beloved Queen and all the rest. They are doomed, all of them. No point in trying to save them.
But I will gladly sell you some potions, regardless."

Despite the grim situation, he's cheerful and humorous, as always, even when Irene starts selling and buying goods.

" A hunter should stay a hunter, right? Do what she is supposed to do! I am supposed to sell you all this gadgets and observe their effects in the name of science. Our fiery Irene is supposed to slay monsters and probably die a horrible death.
Why is she taking over my business, that's what I'd like to know?"