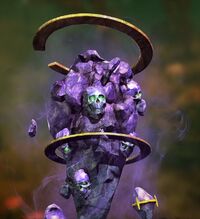 "This soulless and highly lethal adversary is the result of demonic magic giving form and hostile intent to magic of our own creation, then turning it against us. Destroying the arcane core of the Essence doesn't truly solve the problem as its wandering smaller shards extend their cursed grasp to their immediate reach. Magic users being spread mostly within the layer of society with a means to elite education, one learns to expect encounters with these essences in the richer districts of Zagoravia."

The Essence of Magic attacks from distance, it doesn't have a melee attack, but creates a wide area that slows down the character and attacks with waves of energy. It can also daze, leaving the character temporary locked in place. However, they don't have much health and are quite vulnerable to melee attacks, especially those inflicting high damage, like the Hammer, since the Essence of Magic is slow and would't evade it, and the fast-paced ones such as the Rapier. Upon destruction, it spawns three smaller Essences with feeble attacks and few health, very easy to kill.