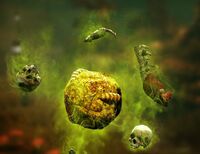 "Using the darkest and most dreaded, detested chapters of Zagoravian history as a foundation for this misery of an opponent, the Plague Essence also doubles as the Essence of Cheap Shots in Hunters' lore. The major form of this living weapon spews out swarms of vile rodents and sows the ground with moats of plague similar to the one carried by its smaller shards."

The attacks of the Essence of Plague are difficult to avoid, since they hit a large area; usually they inflict weakening conditions and damage over time. The Essence of Plague is quite resistant, but slow, a good target for the Hammer's Smash attack. Upon destruction, it spawns three smaller Essences with feeble attacks and few health, very easy to kill.