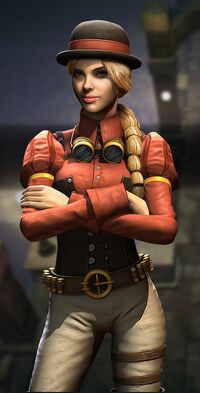 Irene is a hunter, as Victor Vran, and also a merchant, selling rare (yellow) weapons.

She came to Zagoravia after receiving a letter from Queen Katarina, asking the aid of every hunter against the demonic invasion afflicting her kingdom.

Irene soon understands that there's something suspicious about the demon's sudden arrival and their tendency to never wander too far from Zagoravia. Instead of directly fight against them, she starts investigating in the city. When asked by Victor why is she staying, since an entire year, in a desperate and hopeless place as Zagoravia, she refuses to clearly answer the question.

After a while, Victor goes in serch for her, as she is wandering in the outskirts of the city for a long time, to finally found her in a remote place, the Widow's Mine, trying to speak with the spirit of Tzar Borimir. But the ancient king keeps speaking in riddles, as if incapable of communicating otherwise, frustrating the woman, who is asking him questions to understand what's really happening.

"Again a cryptic poem. Every time he appears it's the same thing. It's like he's trying to tell me something but I can't understand."

Once Victor succeeds in making the spirit says a cryptic statement about Queen Katarina's involvement with the demonic invasion, Irene returns to Castle Zagore and starts selling and buying goods, becoming one more available merchant in game.