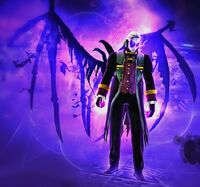 Lord Gabriel is the final boss of the game, found in his Sanctum Sanctorum in his mansion, The Shunned Manor.

It is said that the first vampires have somehow conjured the vampiric curse in their greed for power and immortality. It was part of his grand plan to trick Katarina into dooming her own people and to create an elaborate trap for hunters, who are the only ones who could harm him. He played dirty tricks with the minds of everybody in the city, goading them into their own deaths. In the end, Gabriel fell victim to his own plot, his immortal essence now belonging to the demon called the Solicitor. It might sound strange, but I am grateful of his lesson of power and fate.

The final fight against him, requires to kill him more than once and destroy the phylacteries protecting him with an impenetrable barrier, all while confronting various champion Vampires, especially the Vampire Lurker and the Vampire Knight.

"Undoubtedly, he thinks himself very clever. He believes he cheated me, as he will have to die to submit his essence.
And a creature like him plans to live forever, of course."

"Don't be careful. Be fightful! Make this creature of the past feel your wrath!
Avenge our Order! Good hunting, Victor Vran!"

Lord Gabriel is the being known as Voice from the beginning of the game. As told by Wa-Lee the Solicitor, Gabriel is one of the first vampires and has served him to obtain power through contracts. It was Gabriel, who, disguised as an old man, took advantage of Victor's weakness in the moment of need, when enemy armies had his kingdom surrounded. It was also him, who presented Queen Katarina with the option of making a demonic pact to save herself from the red plague, a deed that gained him the title of Lord in Zagoravia and the help of the royal family in building his laboratory.

"How could we have been so foolish, so blind? The voice, whispering in our heads, twisting our desires, how could we not recognize him all this time?
Find Gabriel in his mansion beyond the industrial quarter, hunter. He has always fancied himself a sort of scientist and is very unlikely to have abandoned the expensive equipment he gained with my family's help."

Gabriel finally betrays himself while Victor is fighting with demons at the bottom of the Well of Worlds, saying "Seal your fate", the same words of the old man that made Victor sign his contract. in that moment, Victor realizes that Voice is someone he knows. 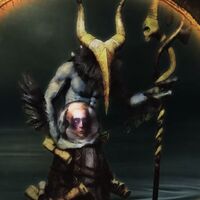 "Seal your fate. The same words tricked me long ago, a naive young man facing a difficult choice. Seal your fate! Never have those words left my consciousness and I have carried their burden ever since. Gabriel brokered my own dark pact, and has done the same with Katarina in her moment of weakness.
A fate will be sealed today, one way or another."

Gabriel bought back the dark pact of Queen Katarina from the Solicitor, how he tells Victor, promising his immortal essence in exchange. In his overconfidence, Gabriel never really believed that Victor could kill him, but in th end, Gabriel's essence ends up in the hands of the Solicitor, and Katarina's pact in destroyed during the fight.